Kite surfing and social distancing, but no Sullivan on Castle Island 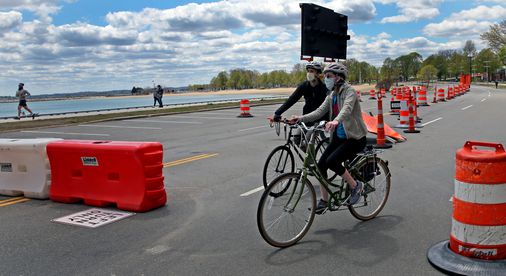 “It would be nice if we could go to another country until it’s over,” said Brendan Gilroy, a 58-year-old construction worker who has been off work for two months. “I guess we just have to do the best.”

Gilroy sat with his back to the granite fort, an Australian Labradoodle at his feet and Logan Airport across the water in front of him. Normally a hive of activity, the airport was strangely quiet this recent afternoon, its runways almost empty as only a few planes were flying there or bringing passengers from elsewhere.

Above our heads the roar of jet engines was absent, and the only obstacle to a conversation at normal volume was a strong wind off the harbor.

That wind swept through the empty parking lot outside Sullivan’s, the Castle Island seafood and snack restaurant that was closed during the lockdown. A locked gate, more suited to the dead of winter, barred the entrance where a long queue would meander outside on happier days.

“Don’t worry,” read one review. “When the time comes, we’ll be there to provide the comforting beach food that our family has been providing your family for almost 70 years.”

The adjacent playground was not in use, not a single child climbed while parents rested on the benches. Near the playsets, piles of overturned hulls from the Harry McDonough Sailing Center waited to be launched in better times.

Still, a small but steady stream of people was walking around Pleasure Bay. They included Marie Morris and Maura Hanrahan, masked friends in their thirties who decided to wander clockwise on the loop, flouting orders from two large digital signs that pointed to visitors in the opposite direction.

“I’d rather do that than stay inside the house,” said Hanrahan, who lives in Lowell.

Mike Doucet can understand. The Lexington man, 62, known as Kiter Mike, wouldn’t let the coronavirus stop him from playing his sport.

The sport is kite-surfing, and Doucet was circling Pleasure Bay, soaring tens of meters into the air and plunging back into the water with a cry of joy that, for a moment anyway, seemed to signal that all was well in the world.

Doucet and a few pals in wetsuits gathered on the beach near Day Boulevard, which was closed to cars on the ocean side of the marine park. A friend is from Morocco, another from Ukraine, a third from France. They joked to each other, measured the wind changes, and rode a breeze that blew 15 to 25 miles per hour.

They weren’t wearing masks. They also didn’t get closer than 6 feet from anyone.

“You’re socially distanced anyway because you’re on the water and away from each other,” Doucet said. “You get in your car, put on your wetsuit and jump into the water. Then you get in your car and drive home.

Doucet, who sells seafood, said kite-surfing has helped fill in the gaps in his schedule.

“I always wake up at 4 am without an alarm clock,” Doucet said, shrugging as he stood in the sand. “So you’re up, making coffee, and there isn’t much you can do in the house. It’s a godsend.”

Gary Pikovskay, 41, from Ukraine, beamed as he prepared for the water for the first time in more than two months. Pikovskay had been quarantined at his Cambridge home, but with a broken leg, not because of the pandemic.

“This is my first day away from home since having had surgery,” Pikovskay said. “The whole virus thing kind of missed me. In a way, this is the right timing.

Good timing, however, doesn’t extend to the other parts of the band’s routine: the hot dogs, fries, and cokes at Sullivan’s. Then stop at Santarpio’s across the water in East Boston. And the camaraderie over a post-surf beer, said Doucet.

It’s all about adapting to the era of the coronavirus.

At the end of the beach, Giovanni Sambotti was getting ready to put away his windsurfing equipment as a spitting rain fell. The 47-year-old from Cambridge had only surfed for the second time this spring. The other years, Sambotti said, he would go out three to four times a week.

Sambotti said he was not afraid of contracting the virus, but wanted to do his part to keep others safe.

Still, the change in routine was difficult. Sambotti held his sail, admired its slender lines and smiled slightly.

Brian MacQuarrie can be reached at [email protected]