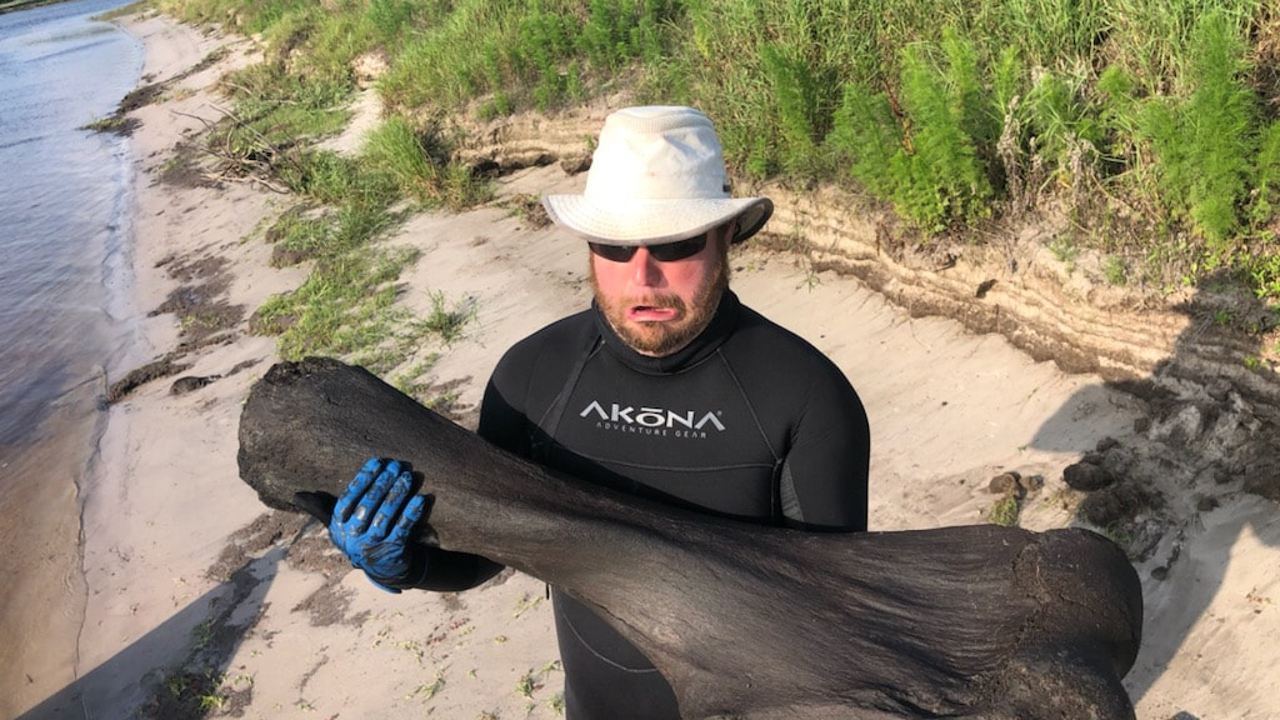 Two men from Florida found a bone from an animal that roamed the Earth millions of years ago.

ORLANDO, Florida. – Two men from Florida found a bone from an animal that roamed the Earth millions of years ago.

One quick glance and it’s clear this isn’t your average fossil.

“Henry is my dive buddy. He yelled at me, said, ‘Hey, Derek. I found something!’ Oh my God!’ It was really, really cool, “said Derek Demeter, director of the Seminole State Planetarium.

Demeter and his friend found a four-foot-long, 50-pound mammoth bone while scuba diving in southwest Florida earlier this week.

They believe it to be the femur, or thigh bone, of a mammoth and that it dates back to the Ice Age between 2.5 million years ago and 10,000 years ago. The actual age of the fossil is difficult to say.

“This one is a lot denser, so we kind of think it’s somewhere in the middle. Probably 100,000 years old,” Demeter said.

It’s bone like that that drives these guys diving and digging all over Florida. On the same day, they also found parts of an extinct shark and the tip of a prehistoric saber-toothed tiger.

“What I love about it is like astronomy is time traveling. It plays with the imagination so you go like ‘Wow, what was going on right now. -the?'”

Demeter says the bone was fairly well preserved because they found it protected under the sand.

Now he will be in his friend’s middle school class so they can educate the children.

“It brings us joy to know that we can discover things that people really feel excited about.”

Tune into FOX 35 Orlando for the latest news from Central Florida.

The investigation into the death of a former Cambridge mayor who died after scuba diving in South Africa opened today (April 22).

Nigel Gawthrope, 61, was on vacation with his wife Jenny in the KwaZulu-Natal region of South Africa when he died on January 11, 2019. He had been eight months in his role as Mayor of Cambridge when he was deceased.

Senior Coroner David Heming confirmed today that Cllr Gawthrope was scuba diving when he died, but he did not give a cause of death at the opening.

Nigel Gawthrope was an experienced diver and underwater photographer.

Signing up for the CambridgeshireLive newsletter means you will receive our daily news email.

Nothing could be simpler and it only takes a few seconds – just click here, enter your email address and follow the instructions.

You can also enter your address at the top of this page in the box below the image on most desktop and mobile platforms.

Have you changed your mind? There is an “unsubscribe” button at the bottom of every newsletter we send out.

On the day of his death, the National Institute for Sea Rescue of South Africa released a statement saying a man had suffered cardiac arrest without mentioning Cllr Gawthrope’s name.

He said: “At 12:30 p.m., NSRI 39 Rocky Bay station was activated to respond to Umkomaas where a rental dive boat sounded the alarm and was [sic] heading towards shore from a dive reporting CPR efforts on a 61-year-old Briton who surfaced after a dive before suffering cardiac arrest on the boat.

NSRI Station 39 Rocky Bay, Netcare 911 Ambulance Services, eThekwini Surf Lifesaving Rescuers, and Search and Rescue Police responded and made an appointment with the dive boat upon arrival ashore and despite efforts. CPR intensives deployed by paramedics, the man was unfortunately pronounced dead. “

The news of Cllr Gawthrope’s death saddened the community, with many paying tribute to the mayor in January 2019.

Cambridge City Council Chief Cllr Lewis Herbert said: ‘The loss of Nigel is a huge shock and hurts all of us in City Council, especially his closest colleagues, and it is nothing compared to the devastation. that his close and loving family feels. now.

“I spoke today to Jenny, his wife and our mayor, and I conveyed our condolences and our deepest condolences to them, and we are very happy that Nigel’s brother is flying on Monday to support her when she is. needs the most. “

Cllr Gawthrope had served as a city councilor for seven years after being first elected in 2012 to represent the King’s Hedges neighborhood and was re-elected in 2016.

In May 2018, he was unanimously elected Mayor of Cambridge until May 2019.

A pre-inquiry review hearing is scheduled for Tuesday, May 25.

An athlete who died in the air while kitesurfing could have been saved with a simple heart check, his heartbroken sister has revealed.

Ger Fennelly, who would have turned 40 yesterday, died of Sudden Adult Death Syndrome while attending a charity event at Dollymount Strand, Dublin on October 31.

Her sister Elaine Fennelly, from Beaumont in Dublin, said a simple EKG could have saved her life and urged athletes to get checked for heart disease.

She said: “At first people thought he had lost control of the kite and died from the impact of falling from a great height.

“We now know from the postmortem results that Ger died of a congenital heart defect that was never detected at birth. He suffered cardiac arrest and died in the air.

“Knowing that he died before impact and did not suffer was reassuring.”

The experienced kite-surfer and triathlete was fundraising for a mental health charity at the time of his death.

He had only been in the water for 29 minutes when he had a heart attack.

The father-of-one suffered from type 1 diabetes, but his sister said he never let his condition stop him from accomplishing everything he set out to do. She said: “He was really, really strong in his physical form and was a really talented athlete.

Elaine said: “He finished an ironman in Barcelona in 2018, he also swam at Alcatraz and did a triathlon in San Francisco.”

Ger has been described as a “gentleman” by his friends and colleagues.

He had worked as a housing officer for the Cluid Housing charity, providing affordable, quality housing to people in need of housing.

He had just been offered a permanent position within the organization and was due to start a new role in the company.

Ger’s family has set up a fundraiser for the screening unit at Mater Hospital which has already raised thousands of euros.

They hope to educate athletes about the dangers of SADS and encourage as many people as possible to get tested.

A statement from Ger’s family on the fundraising page read, “€ 45 is the cost of a life-saving CT or ECG for people at risk for SADS at this clinic.

“And the screening that takes place here depends almost entirely on fundraisers like this.

“Our family will now be screened here for the same genetic disease as Ger, as well as other families who have suffered or will unfortunately suffer from similar grief.

“Donations to this clinic will help screening become more proactive and help researchers build a biobank of samples that can help identify families at risk before the tragedy. “